Back in May, I miscarried our first child around 9 weeks of pregnancy.

A lot of this year has been marked in my mind as Before The Miscarriage and After The Miscarriage. I don’t mean to always think or talk in those terms, but it was such a defining experience for me that sometimes I’m still left reeling from it.

Before The Miscarriage, I had come to the point that I really didn’t think I ever wanted kids. There was no outwardly obvious reason for this feeling—I was happily married, totally fulfilled in my ministry and careers, but I just didn’t feel that “urge” that so many women feel to have children. On another level, I would look at the world around me and think, “WHY would I bring a child into this dark place?” Perhaps Sam and I were just meant to blaze trails and do all we can here to shed light to others and then be DONE, leaving behind nothing but a legacy of Jesus.

And then I got pregnant in March.

I’ll be honest. My initial reaction was tears and a cry of “my life is over!” Haha. As if I was some teenager who had yet to even experience the world. Once the shock subsided (about 24 hours later), I was okay. There was new life there that maybe I hadn’t planned, but I believed God had. And Sam was excited. We let ourselves talk and dream and plan right there in that tiny 600-square feet of apartment, believing in faith that God would provide where we weren’t ready.

And then the complications started. I’ll spare the details, but there were sonograms happening almost every week and constant new reasons to run to the doctor. Pain, internal bleeding, bloodwork that wasn’t testing right. After a couple of weeks, our doctor started preparing us for the possibility of miscarriage. She was going to give it one more week.

But that next week, about six weeks along, there was a heartbeat. A beautiful little flutter right there in my abdomen. A sign of life. A precious, fighting little life. For two weeks, we breathed a little easier, thinking the worst was over. We prayed and we prayed that God would protect that little one and help him/her grow to be a healthy baby. I was in the midst of my busiest author tour season, speaking and traveling every weekend while fighting down the nausea. I remember being at YAB Fest in Austin on a panel with my friends and thinking, “Oh my gosh, I might puke right here in front of this entire audience.” My author friends who knew were so accommodating and sweet. And the thought of that little heartbeat made it all worth it.

Mother’s Day came and I felt so blessed to know my little secret. In my heart I was already a mother, praying for and eating healthy for this little treasure growing inside me. We finally told our families that Sunday and there was a thrill of excitement among the text messages and phone calls. Our families had never pressured us on the kid issue, but it was obvious how much they wanted it too.

On Wednesday, May 15th we went in for the sonogram and saw a beautifully-formed little profile picture. The baby had grown miraculously in two weeks! It didn’t look like a little stick inside a circle anymore. But the flutter… Where was the heartbeat? Nothing moved in there. NOTHING. For a moment, the little world of dreams we had built in our hearts came crashing down. The sonographer determined the heart had stopped beating three days prior.

On my first Mother’s Day.

We were devastated. Surgery was immediately scheduled for Friday. It was my last week of school. I needed to be there on Thursday to give my finals and say goodbye to my students who didn’t even know what was going on. We posted our news on Facebook the night before surgery. Countless precious friends we hadn’t even gotten to share pregnancy news with were hearing for the first time about the private journey we’d been on. Nobody found out on Facebook that we were pregnant—they found out that we had LOST a baby. The kindness and prayers of our friends and family wrapped a solid spiritual blanket around us that week. God’s hand was right there, surrounding us in the shadow of His wings, walking each difficult step with us. I came out of anesthesia, crying to the nurse, “My baby is gone now.” I wasn’t prepared for my flatter stomach post-surgery, not realizing how much bloating had been my little baby.

This year has been one of the most difficult of my life. My creativity has struggled. I can’t seem to finish one book. I’ve felt the depression and doubt nipping at my feet, always present, but never in control. I lived in a shadow of fear most of the summer, clinging to Sam in ways I’d never clung to him before. I told Sam and my mom After The Miscarriage that I don’t remember ever going through something that I felt had permanently damaged me. I don’t feel the same anymore and I don’t think I ever will.  That little life inside of me contained a little piece of my own soul. And losing it felt like losing a tiny part of ME. A part of me that resides in Heaven now…a part I won’t get back until I’m there. If I feel this way about a 9-week pregnancy, I can’t imagine how others feel who have lost children further along in pregnancy and, even worse, years after their birth.

I’ve had people say to me (with good intentions) that maybe God let me go through that to show me that I could want my own children. But I don’t believe that. Maybe the experience of pregnancy changed my heart about the issue, but losing that baby was never a necessary experience in order to teach me something. I didn’t have to lose the pregnancy in order to suddenly “see the light.” I was ready for THAT baby. I was willing, no questions asked, to become that child’s parent on December 21, 2013.

But now here I am on December 21, 2013 with no baby in my empty arms. I wish I could tell you that I now see an ultimate purpose in the loss. I wish I could say that God has used it for some greater good that I can detail out to you right now, six months later. But I can’t. Because, honestly, that just hasn’t been revealed to me yet. And I’m okay with that. I think God cares more about me trusting Him in all circumstances than He cares about me understanding the WHY of those circumstances. I may never understand the WHY of a lot of things in this world. But my goal is this… I will hold my Heavenly Daddy’s hand through all of it, knowing that He, in His all-knowing awesomeness, will guide me on roads that are dark and untraveled. Like a child, I ask Him for things and sometimes He just says, “No.” It’s not my place to question. It’s not my place to tell Him what to do. After all, we live in a fallen world and sometimes—oftentimes—bad things just happen to “good” people. So I say, “Okay, God. If the answer is no, then help me get through it.” And He has. And He does. And though my arms are empty today, my heart is full.

I confess that I’ve carried my first sonogram picture in my purse ever since the day I walked out of the doctor’s office with it. I never got to share it with the greater world, but I’ve kept it with me the last seven months. The first thing the sonographer said after hearing the heartbeat was, “That sounds like a boy.” I looked at it that day, scrunched my nose, and laughed, “It’s in the shape of a stick…which even looks like a boy.” There’s no way to really know, but sometimes I like thinking of “him.” I’ve now carried “him” to full-term in my heart and in my purse. And I think it’s time to let “him” go. I’m crying as I think about no longer having that picture in my purse, of no longer catching my breath on the random occasion that it spills out or that my fingers run across it in pursuit of a stick of gum. It has brought me comfort.

But it’s time to let go.

I think this Christmas I look at that newborn baby in the manger just a little differently. The fact that God came down in the form a precious, delicate, and innocent little baby that could fit into our arms is a true miracle and one I can hardly fathom sometimes. And maybe I see Mary just a little bit differently this year too. Maybe I smile a little more sweetly as I see her cradle Emmanuel, God With Us.

As she held the God of the universe in her arms, He must’ve been holding her too. 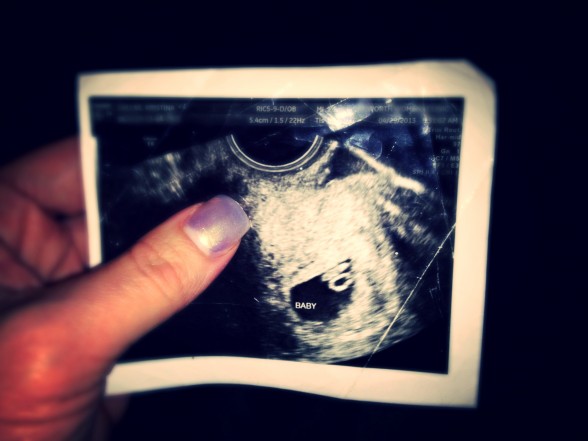