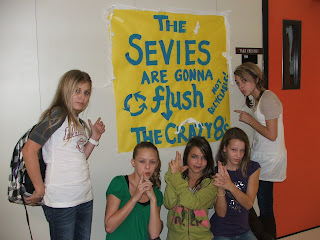 I confess I like a good, tasteful prank or two… especially when it is for the purpose of motivating students! As Student Council sponsor, I was organizing a paper recycling drive where all 2nd period classes competed to bring in the most pounds of paper. To make things more interesting, my 7th grade students and I selected Mrs. Chesney’s 8th grade class to personally challenge in this competition. (Mrs. Chesney teaches Advanced Math for both grades and I teach Advanced English for both grades, so we share the same students. In essence, I was going up against my own 8th graders and she was coming up against her own 7th graders.)

So, my class delivered the following letter to her class one day during 2nd period:

As you know, a competition is underway to see which 2nd period class can collect the most recyclable paper. Because you are seen as a worthy opponent, you have been selected to participate in a one-on-one challenge with General Dallas’s 2nd period class. As the rules of war dictate, you are given the option to surrender up front and not participate. However, be warned. Annihilation is imminent. Should you choose to accept this challenge, we request a response immediately. Please send a messenger to Room 101, but remember that is enemy territory. We cannot promise that he/she will be returned to your room.
Please have General Chesney sign below and return to Room 101 to accept the challenge. We look forward to demolishing you.

General Dallas and the Soldiers of Room 101

And accept Chesney’s class did! They came down and brought a piece of paper with the note “BRING IT! YOUR CLASS IS GOING DOWN!” One of my students looked at it and said, “Recycle THAT.” This reminded us of our real goal here – and any communication over this competition could no longer be done on PAPER… lest we help the other class out. So, Mrs. Chesney got cute when she went to our principal and convinced him to put a message on our brand-spankin’ new digital scrolling marquee outside. My students and I stood at the window as the marquee scrolled through announcements and then there it was – a message for us. “MRS. CHESNEY ACCEPTS THE CHALLENGE AND WILL WIN THE PAPER DRIVE CONTEST!”

This was war, indeed. Sevies vs. Crazy Eights… English vs. Math… Me vs. Chesney 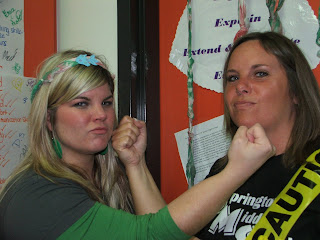 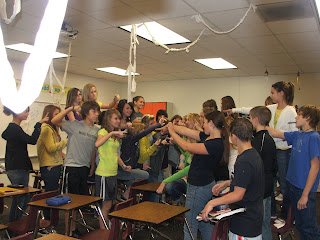 The following Tuesday, several of my Sevies stayed after school to pull our first prank. After succesfully (and quite sneakily) stealing a master key from a friend, we launched an attack of toilet paper on Chesney’s room. We braided, tied, knotted, and made bows out of toilet paper and arranged it nicely all over the room – providing space for class instruction to still take place. I will confess, we had several moments in the dark where we were hiding from other teachers in the hall… we didn’t want anyone blowing our cover! Then we posted a sign outside the door that said “THE SEVIES ARE GONNA FLUSH THE CRAZY 8’S!” 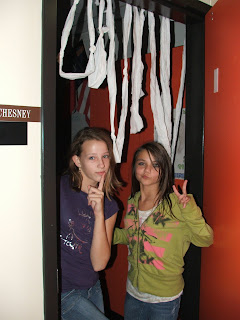 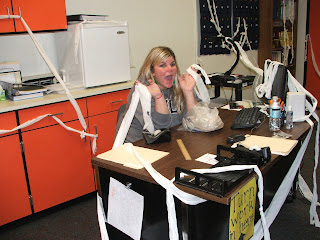 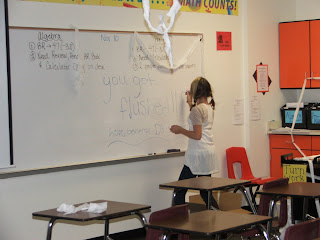 Chesney was shocked and her students were indignant that we had taken such a stand against them. From the moment we returned to my room after our escapade, I told my students that the Crazy 8s were vicious and they would attack me personally… with something fishy! Ever since Phantom Island came out with Whitnee having a fish phobia based on my own, my students have been bent on bringing a live fish to class just to freak me out. I knew I had just invited the perfect opportunity for their best laid plans to come to fruition. 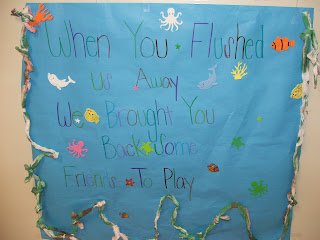 And I was right. A few days later, the Crazy 8s stayed after school trying to prank me. They were so obvious that I pretended to leave school and locked myself inside a dark classroom, waiting patiently at my desk to catch them. Sure enough, they came running with another master key (no thanks to Palmarchuk for supplying it!!) and opened the door and BAM! There I was. They froze in fear and then ran. I felt kind of bad so I intentionally showed up a little later to school the next day – giving them time to pull their prank. 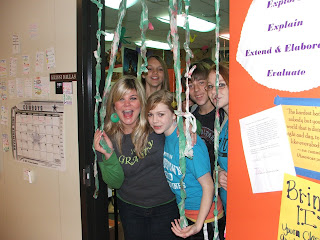 But, OH. MY. GOSH. I had NO IDEA to what level of artistry they would go just to prank me! I got to school and my room was an UNDERWATER haven with foam sea creatures and seaweed hanging all over my ceiling. (They used our pretty toilet paper, dyed it green and red, and that was the seaweed.) My desks were overturned with CAUTION tape and there was a pond in the middle of the room – and yes, a real live beta fish in a bowl in the center. They even brought the sounds of ocean waves and the room was covered with fishy paper cutouts and stickers. (I’m still finding them in places I didn’t know…) Anyway, I was SO IMPRESSED with the creativity of my students that I couldn’t tear it all down. We still have seaweed and stickers and the foam creatures up everywhere… 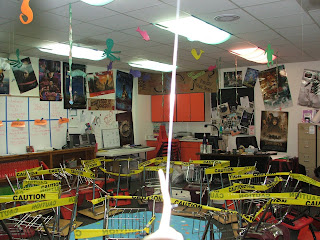 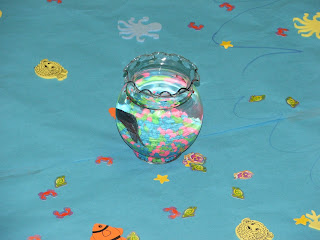 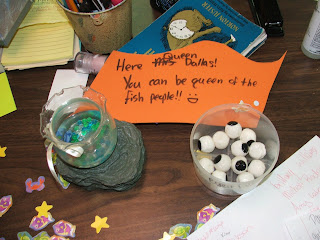 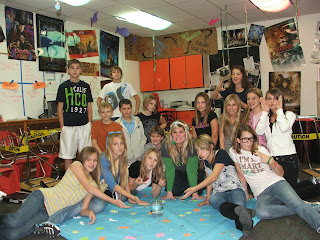 As for the fishy, we sent them an email saying that my room had to be cleaned up after school OR… 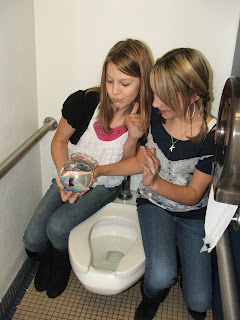 After that, we halted pranks and focused on bringing in the most paper… And the results were announced today! Over two days, our school weighed (and dumped across the street) 7,348 pounds of paper (Over 3.5 tons!)
Our band kids brought in 3389 pounds of paper, averaging 67 pounds per person.
My class came in 2nd place with 875 pounds, averaging 51 pounds per person.
And, yep, Mrs. Chesney’s class brought in 801 pounds (with the help of another class pitching theirs to the cause against my Sevies), averaging 50 pounds per person.
WE BEAT THEM!!! Makes all the fish drama worth going through. But, really, the pranks were worth it to see such participation… Special thanks to Chesney for having “fun” with us and to my Principal for trusting us to not interrupt the learning process in the name of pranking! 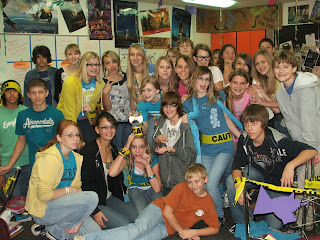