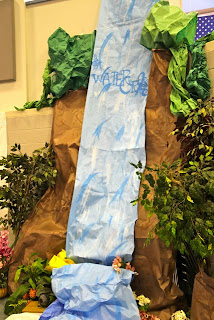 Monday, April 16th never really had a start to it. After the news I received the night before about Josh Walker (see last blog post), Monday morning creeped up on me through the long sly hours of a sleepless night. I arrived at school with a heavy heart, barely able to go ten minutes without my eyes tearing up. I had sent texts to my mom as I tried to process my emotions. In one of them, I said, “I don’t even want to launch this book today. Doesn’t feel that important anymore in the grand scheme of things.” She encouraged me with Scriptures and prayers. Then she said: “Krissi, don’t deny God’s plan for you today in your book signing. There are greater victories to be had. We are all His instruments in His plan. Show a comforting spirit today for Josh so others will see the peace of Jesus in you. Sprinkle those colorful seeds you have!”

Those were the magic words. It was time to put on my big girl panties and get through my day no matter how shattered I felt on the inside. By the time my first class arrived, I had pulled it together. But I was tired. And puffy. And so NOT excited about the big Watercrossing pre-release party that night – the one we’d been publicizing for weeks. I’m used to being the one who drives enthusiasm, who motivates other people, who thrives on creating energy… and that day, I just didn’t have it in me.

Fortunately, my students did.

The first words I heard from kids that day were, “Mrs. Dallas!! I’m coming tonight! I can’t wait to start READING!!” My 7th and 8th grade boys who do off-season 7-on-7 Football had gotten together and decided they would stop by the party that night before their practice. Several of my girls were planning to go and grew even more excited when the announcement was made during Advisory that the characters of Gabriel, Caleb, & Thomas would be making an appearance at the party to take pictures with fans. This created so much discussion about the hottie heroes in my series that by 8th period, my own boys had decided that THEY should pose as the middle school versions of Gabriel and Caleb. L-O-freaking-L! (And if you only knew the ten minutes of laughter it took for us to get a good shot of this…you’d appreciate it even more.)

The party kicked off with lots of music – a playlist of songs that had inspired me as I wrote the Water books. Jennifer Pennington, the high school librarian (and my original cover artist when I was self-published), hosted the event with the help of her library aides. My friend and fellow teacher, Erica Weber, had already conned an early copy of Watercrossing from me and gave her teasing review of it to the crowd. Then I was blessed to have Courtney Ussery – of the Fuzzy.Coffee.Books blog – drive all the way from Keller to be there! She shared her story about how she found the original version of WIND in the bookstore a few years ago, how she read it in one sitting (on the floor of her office), and how excited (and even conflicted) she was as she read the continuation of the story in Watercrossing… Her “happy place” on the Island had now revealed a darker side and now she was even questioning her position in the love triangle! Haha.

When I took the stage, I got to share a few of the ways Springtown had influenced the writing of Watercrossing. When I started writing the Water books, the junior and senior classes were in my 7th and 8th grade classes…

When little red-headed Ginnie Merrill was in 7th grade, she was one of the few students I had allowed to take a binder home with the WIND manuscript in it. (I was in the querying stage and she was a teenage beta reader for me.) She was given post-it notes to record any thoughts on any pages that stood out to her. I chose Ginnie because she was a strong writer herself and loved to read. When I got the binder back from her (in a matter of days), one of her post-it notes in the second chapter of Windchaser completely cracked me up. It was the scene where Whitnee was hunting lightning bugs with Jaxson, who she had already nicknamed Mr. Abercrombie, and she commented about his smell being “wonderfully male and modern.” Ginnie, in her little 7th grade self, commented that she could totally relate. She said it was like when “you’re walking around in the store and this really nice smelling guy walks by. It’s like you get sucked into the yum vortex.” I loved that term so much that I decided to write it into the books! There is a whole chapter in Watercrossing dedicated to The Yum Vortex, because most all of us girls (and I think even guys) totally get this concept. We can totally be swept away by a delicious smell… likewise, the WRONG scent can totally turn us off. My goal is to see the expression spread – I challenged Springtown to get it started. We’re going NATIONAL with the Yum Vortex! 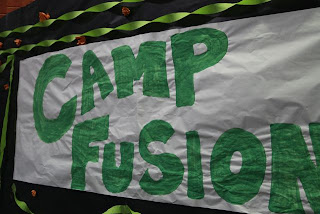 As you know, Whitnee’s mom is full-blooded Spanish. I did this for several logical reasons in the book that made sense to me – but also because there is a lot about the Spanish/Mexican culture that I love. Having grown up in San Antonio, TX, I was no stranger to the food, music, and influence of Mexican culture – not to mention, the occasional teenage attraction to a dark-eyed, dark-skinned Mexican boy. (Que guapo!!) Ha. Anyway, in Watercrossing, I felt that it was time to show readers more about Whitnee’s family dynamics – being the only white kid in a family of Spanish, bi-lingual people with totally different physical characteristics from her. To do this accurately, I consulted Letty Camacho, a friend of mine at school who works with our ESL kids and fosters communication between our Spanish-speaking families and the rest of our staff. She gave me some insight about the culture of families and helped with a few Spanish phrases in the book. So I named Whitnee’s aunt after her!

Character Names
In Watercrossing, Caleb’s friend and fellow athlete on the football team is named Dillon for Dillon Stubbs, an athlete in Springtown and all-around good guy! (Even though Dillon in the book comes across a little bit as a jerk to Whitnee, he’s really just being a typical teenage guy in how he relates to Caleb.) You will also find characters or name mentions after Springtown graduates Sara Lightfoot, Sarah White, Billy Jack, and Claire Grant.

After that, I introduced the three guys (two of which are former students of mine) who would be acting as our Gabriel, Caleb, and Thomas. I won’t tell you all the details about how Klay, Bryson, and Eddie came to step into these roles, but I have to give major snaps to them for being willing to show up and take pics with fans! Our PTA sold picture opportunities with the guys as part of a PTA fundraiser and it was a lot of fun! In my mind, these boys will always be those awkward and energetic middle school boys who used to play pranks on me. However, you can tell that they have bloomed into swoon-worthy guys who are still loyal to their old teacher. (Girls, WAKE UP.) 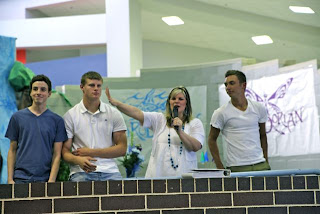 The guys stayed on stage with me while I answered questions from the crowd. After that, we pulled up the famous pink chair that I use when reading to my students. All past and present students were invited to come sit on the floor in front of me while I read the opening scene to Watercrossing. This is always my FAVORITE part of a Springtown book signing. I’ve spent years reading the works of others to my kiddos… there is nothing like the feeling of getting to read my own work to them like that. Honestly, reading my own writing aloud is my least favorite thing to do as an author. But when I look out and see the faces of my students, it becomes so much easier. I forget who else is in the crowd – or that there even is a crowd – and I read with all the inflection I would normally have when reading to them. This time was especially fun as they knew the characters well enough to react to the story. (“Oh, snap!” “Whaaaa…?” GASP.) 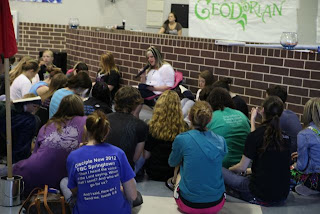 After that, the autographs, the hugs, and the pictures went on for a while. For the Watercrossing tour, I decided to have everyone who purchased a book sign my blue tablecloth. I confess that I got this idea from the lovely recording artist, Sarah Reeves. When I bought her CD, she autographed it and asked me to autograph her table cloth which at the time was almost completely filled with the scribbles of fans. I thought that was the coolest souvenir I’d ever seen! And the autographs from my students, friends, and fans turned out to be so fun! I’m looking forward to continuing my autograph collection as I go to new places and events. (SIDE NOTE: I did learn the hard way to put down another layer of a tablecloth in order to protect future table surfaces… Eek. Thank goodness for Goo Gone.) 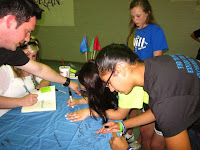 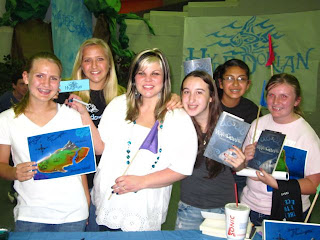 I drove away that night with a full heart.
And with several excited messages from people who had already gone home and immediately started reading.

Get lost in the Yum Vortex, yall. 🙂