Did you know that the TLA Conference is HUGE? I mean, like, 4-days-long-stadium-sized-facility-with-multiple-parking-garages-and-an-80-page-conference-program-HUGE. I trudged into the Exhibit Hall Thursday morning carrying a purse, a huge beach bag of Phantom Island swag, and a heavy suitcase of books. (Did you also know that the more books you publish, the more there are to carry around and the HEAVIER that becomes on the old unworked muscles? My little Phantom Island world is outgrowing my ability to carry it with me everywhere.) To top things off, you can’t ROLL anything in the Exhibit Hall…so my suitcase had to be carried. I was already 30 minutes late (thank you, Houston traffic) and dripping with sweat (thank you, Houston humidity) and I had no idea where to go. I don’t often get insecure at an event – usually that innate spirit of adventure starts to kick in for me – but after the hectic and emotional week it had already been (traveling alone in tornadic weather for audiobook recordings, death of a student, Watercrossing Launch Party, traveling alone late at night to Houston), I was not feeling the adventure. Whyyyy hadn’t I brought someone with me for help? 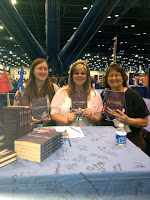 Enter Pat Anderson from Overlooked Books. There he was in the middle of selling merchandise and chatting it up with librarians when I punched in his phone number. “Hey, Pat. I’m here… Whaaa…? Where do I go?” Like the gentleman that he is, he gave me some simple directions for where to meet him so he could carry my suitcase for me, assured me it was okay that I was so late, and told me where to go to get my badge.
There were several other authors at Overlooked Books with me and very little space for all of us. But that was totally okay with me – I’m more of a stand up and greet people, pass out postcards, and make conversations with potential readers kind of girl. (SIDE NOTE: If you just sit behind a table and expect people to come find YOU to purchase your book, it ain’t gonna happen. Not unless you’re a big name. Which I’m not. YET.) 🙂 Being out in the crowd was totally good with me. I got to make a TON of contacts in just an hour. 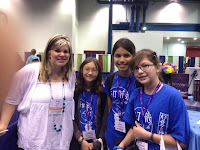 It was Teen Day, so I mostly zoned in on the kids in blue shirts that day – if there was a group of teens, I was going up to them, introducing myself and handing out tribal quizzes and autographed postcards. I’m most in my element around teenagers and that proved to be a major plus later. It wasn’t long before there was a little buzz going about my books – thanks primarily to my own experienced librarians, Armenda and Cindy, who wore Phantom Island tribal shirts and walked around the exhibit hall talking about me. “Krissi Dallas is signing books RIGHT NOW on Aisle 2600 – go find her!” You can imagine my surprise when teens starting coming to find ME. 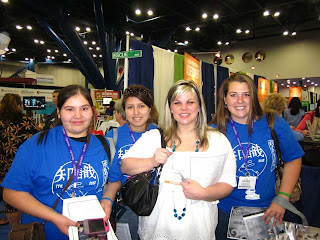 That was how I met a sweet group of girls who I ended up going with to stand in line to meet Lauren Kate, author of Fallen, et al. Not only did I get to engage these students and their librarians while we stood in line, but we also got autographed books by LAUREN KATE…who was astoundingly sweet and soft-spoken. (Not sure why it took me by surprise to know that not every author out there is as outspoken and spazzy as me. Ha. But she was certainly a calm breath of fresh air that day.) SIDE NOTE: Yes, someday, I’d like to be the author who gets to just show up to a table looking fresh and non-sweaty and sign books for an already established line of fans. But until then… I’m okay lugging my crap everywhere and still being a fangirl for others!
Now the part that I was most nervous about was the time I was scheduled to be in the Author’s Area. This is where you’re assigned an aisle and a table and people read the signs and go stand in line to meet you and either buy or pick up their (free) books. I had no free books to give, but I was surrounded by other authors whose publishers had free books to hand out, which means they had lines of people there to see them. I had already determined in my mind that this event was not about selling books for me – it was about making contacts with librarians and readers and developing a network of Texas contacts. But I shouldn’t have worried…

I never had a lull at my table. Many of the people who had heard of me through my librarians earlier in the day came to see me and buy copies of Phantom Island books. The teens I had met and talked to brought others to meet me and discuss their tribal quiz results. Some ended up buying copies of the books for themselves. And thank GOD Cindy was there to help me with the line – I couldn’t have done it alone. She wrote receipts and took money while I signed books and chatted with people. It was great. I couldn’t believe how much I sold, much less how many people came to chat with me.

On Friday, I was in the Author’s Area for two hours. It was the last day and most people had already taken off. But that didn’t stop some people from coming back and seeing me or stopping and chatting for a while. Once again, I sold way more books than expected. Two days in a row, I left with a much lighter suitcase! More importantly, the educator in me really enjoyed meeting so many librarians and relating on topics of reading and selecting books for teens. I’m excited to know that Phantom Island has a home in so many loving libraries across Texas now! I look forward to going back to TLA next year – not as the Totally Lost Author, but as a more experienced and confident author… Maybe even as a speaker or presenter! I’m totally passionate about education and reading. And I believe in today’s time we have to sell an “experience” for students, not just a book. Librarians and teachers play a huge role in marketing those experiences to the audience and I’d love to empower them in that!
Thank you to those of you who spent time talking with me or made a point to come find me there! You totally turned my crazy, insecure experience into a total blessing. See you next year!