Umm… When Is That Sequel Releasing? 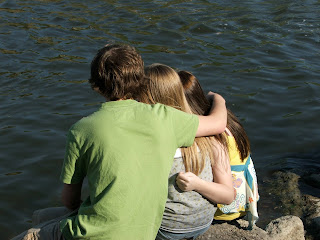 I cannot tell you how many times I’ve been asked this question in the last year… and it seems like lately the question is coming at me from fans in every direction. As Phantom Island keeps spreading and more fans are popping up everywhere, the response has been overwhelming. First of all, as an author, I absolutely love hearing how excited you guys are about the next installment in the Phantom Island series! And it is because of your enthusiasm that I feel like you all deserve an explanation of our plans in releasing Water (Book 2).
As most of you know, we published Wind on our own – something that never was my first choice, but has ultimately been the best thing for me with this series. Practically a year has gone by since Wind‘s release and it is obvious that Wind has proven – through sales, fan response, reviews, awards, and a consistently growing fan base – that it has the commercial appeal to make it in this industry. For these reasons and more, we are really trying to find a literary agent who is willing to take on the series and try to sell it to a major publisher.
I will spare you the details about the constant pressure, heartache, doubts, and rejection that a self-published author must go through to achieve this seemingly unachievable goal. Instead, I will just tell you this… it’s a long process and it’s one that I must exhaust once again before I will release Water. I feel that I would be doing the series an injustice if I didn’t at least try the traditional publishing route again. Sam and I agree that we have a better chance at getting the series commercially released through traditional publishing if there is only one book out there (Wind) for them to re-release. Once there are two, our chances have dropped significantly.
Not only that, but I overestimated my ability to produce Water so quickly after Wind released. I am still currently writing Water – I know exactly where the book is heading, but have lacked the time to get it done. I wear a lot of “hats” and jumble a lot of responsibilities in my normal life – and that was BEFORE I became an author. In the middle of maintaining a full-time teaching job with extracurricular responsibilities and passionately supporting both our youth ministry and our music ministry at church, I’ve also been touring schools, bookstores, festivals, etc., to give Wind the legs to stand on… and that has taken a lot of time and planning.
And might I add that Water itself is a BEAST of a sequel… wow. It’s emotionally draining and intense… and all kinds of fun at the same time. But it requires my full attention to do it right. I am over 2/3 finished with it, so the end is in sight… and what a dramatic ending it will be!
Anyway, I am not complaining about any of this.
I believe everything happens for a reason and timing is so important in these matters.
I am asking my loyal fans and supporters to continue spreading the word about Phantom Island and to remain patient for Water‘s release. I will only give this agent/publisher hunt a limited amount of time before I publish it myself. I am willing to publish on my own again because I now know through my experience with Wind that I CAN do it myself and be successful – especially now that I have such a strong following.
All that to say… Water might be a little delayed in releasing, but it IS coming. And I believe it will be worth waiting for – at least that is what I’m working so hard for. My Secret Squirrels (a group of 6 teens who read the book as I write it and give me feedback) all agree on one thing…
Water is already better than Wind.
Guess we only want consecutive books to get better, right?
Thank you for your support. These seemingly unachievable goals only happen because of it.
((Hugs)) from a very thankful author.
Phantom Island, Publishing, Sequel, Water
Tweet

Comments to “Umm… When Is That Sequel Releasing?”