I confess that I have always had this obsession with stories about friendship between a guy and girl who are actually in love with each other and don’t know it yet. The evolution of a friendship into a romance is so endearing and breathtaking to me because, often times the hero and heroine never know it’s coming. And it always seems like what they have together as a couple is so much deeper and real because of their friendship …

I suppose there were books I read growing up that must have contributed to this fascination. I used to be a member of a young girl’s book club and I would get new books in the mail all the time. One, in particular, that I would continue to go back and reread time and time again (and whose title I am blanking on … It was either Cassie or Carrie???) was about a tomboyish girl on the basketball team. She was kind of friends with a freakishly tall guy (Mitch) on the boys’ basketball team only because their families were friends. Anyway, they both kind of hated each other and I remember finding nothing attractive about Mitch through her eyes as the book started. Yet, as things changed in her family (parent remarried, etc) and she and Mitch dated other people, their friendship started to change. By the end of the book, I had gone through the emotions along with her as she first hated Mitch, liked Mitch as a friend, was hurt by Mitch, and then eventually fell in love with Mitch. I became fascinated with how feelings and perspectives change over time. I believe I was still young enough the first time I read that book to not completely predict Mitch and her getting together at the end. 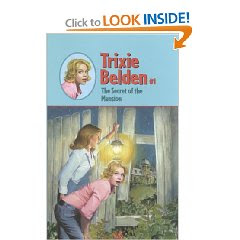 The other books I used to read like crazy were the Trixie Belden novels – now, for you youngins’, Trixie was like pre-Nancy Drew. She was a tomboy who liked adventure and solving mysteries. But, unlike Nancy, Trixie had a band of friends who always accompanied her through every whirlwind mystery (the B.W.G.’s – a do-gooder club of different sets of brothers and sisters). As Trixie gets older in the series, she realizes she has that [look of horror] “more than just friends” feeling for one of the guys in the club. And, of course, I fell in love with him, too. I can’t resist a love story between friends! The tenderness there just tweaks at my little heartstrings. 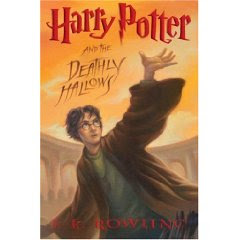 So, you can imagine I was a sucker for Harry and Ginny, Ron and Hermione … all friends for years before they had that epiphany of love for each other. I think I literally cheered out loud when Ron and Hermione finally kissed. (Sam and I read Harry Potter 7 together and that scene along with Mrs. Weasley’s loving words of farewell to Bellatrix were definitely C.O.L. moments – Cheer Out Loud.)

Somehow, because all is right in the world, my own love story centered around a friend becoming more … I NEVER dreamed I would marry my best guy friend from college. I still remember the first time we met and he screwed up a pick-up line. At the time, I thought he was an idiot, but he has always sworn that the greater joke lies in the fact that he said it wrong on purpose. Because (smart guy that he was and is), it got me to talk to him. Even if my first response was, laughingly, “Uh, not how the line goes, Sherlock.” We then proceeded to debate the line and how it should have been used and then the conversation just moved on from there. Smooth, Sam. Very smooth. And a beautiful friendship blossomed out of it. I wasn’t ready then to date him and after several hints, he finally backed off and settled for a good, close friendship (which occasionally catered to flirtation). Even though we were friends, I always knew my place with Sam … if, at anytime, we were in a crowd of people, I could always count on Sam to find me.

A year and a half later from the pick-up line incident, I remember my best friend, Melody, looking at me straight on and saying, “Oh my gosh, I think you like Sam.”

Excuse me, no. I would never date Sam Dallas. He drives me nuts. He’s fun to flirt with, but heck no, I would never marry Sam, so why would I waste my time dating him?! Clearly, I was still in the Denial stage.

Then, a month later my friend, Lisa, asked me, “OK, do you like Sam or something? Because you haven’t stopped looking for him since we got here.”

What?! Me? I was not looking for Sam … he just said he was going to be here, so I couldn’t help it if my eyes kept wandering around the place. But, I could care less if he showed or not …

And then a week later … Sam and I have the much prolonged D.T.R. (Define The Relationship) in which he confessed that something had changed for him. He liked me as [gasp!] more than just a friend! It did explain his relative grumpiness prior to that, but I still responded with: “What? No … we could never date each other … I’m not ready for that. And quit looking at me like you want to kiss me. Ain’t happening.”

And then a month later … bow-chicka-wow-wow. Just kidding. But, it was the right time. The Lord had to work on both of us before we were ready for each other. And I’m thankful for that friendship that I had and still have with my husband.

And so now, in keeping with great love stories of friends becoming more, I leave you with a snippet from Phantom Island, Book One … Whitnee’s best guy friend is Caleb and they’ve spent a great majority of their time lately being jealous of each other’s attention. The thing is, they haven’t quite figured out why …

“I know you’re mad about Jaxson,” I said quietly. Caleb just grunted. “What I can’t figure out is why it makes you mad.”

“Why should I be mad that some guy you met two weeks ago is kissing on you like that? You can’t figure that out?” he replied in a low growl.

“You know, most of the time, I appreciate you looking out for me, but all he did was kiss me on the cheek. You know you have no right to get upset with me over this!”

“You’re only saying that because you don’t want to believe he’s actually a really good guy for me, Caleb! You know he’s completely trustworthy, but you’re hiding behind that excuse because its easier than admitting the truth!” I flung back.

“What truth is that?”

I took a deep breath and made an effort to calm my voice, “I can’t believe I’m going to say this …” I paused trying to find the right words. “The truth is that you’re acting kind of … well, kind of jealous, which I guess is understandable,” I added quickly. “I mean, we’re so close and I …” I trailed off not sure if I wanted to finish my sentence. I had never been jealous before of Caleb and other girls, but this summer things were changing. I couldn’t kick the horrible green monster that roared through my veins every time I saw him and Claire together. I was sure it wasn’t the kind of jealousy that meant I wanted Caleb for myself … it was just a selfish kind of jealousy. He was like a brother, a stupid, annoying brother who I had absolutely no romantic feelings toward – none at all. He still wouldn’t even look at me, so I pressed on with what I believed was the heart of the matter. “I want you to know that no matter who comes along in my life – whether it be Jaxson or some other guy I haven’t even met yet – you are still one of my best friends. I don’t plan to replace you.”

“You really believe that, don’t you,” His tone had softened dangerously. “You think someday our friendship won’t have to change once you find the right guy?”

“I don’t know – why do we have to worry about that now? I want you in my life, Caleb. And since we could never … I mean, we know that we’re not right for each other, so—”

“Do we know that, Whitnee?” he interrupted and this time he looked at me. His familiar green eyes searched mine for something I didn’t understand.

“I’m sorry? I thought we already had the ‘you-and-I-are-wrong-for-each-other’ discussion?” I replied incredulously. How could this continue to be an issue?

“Yeah, remind me again why it would be so awful to date me.”

“Oh, come on,” I attempted a laugh. “What, are you serious?” His face was not joking at all. “Caleb, you know why. We’re friends. We know each other too well … it would be boring. And there’s this little thing called attraction–”

“Whitnee,” he breathed my name in such a way that I lost track of my ramblings and grew silent at the pained expression on his face.