Many of you haven’t heard yet, but I got to blurb my first book for another author! I’m excited to introduce you to a new, up and coming author with a huge of amount of writing talent – Anne Riley! Her first book, Shadows of the Hidden, just released this month and if you buy a hard copy, you’ll find this little quote by someone you know well… 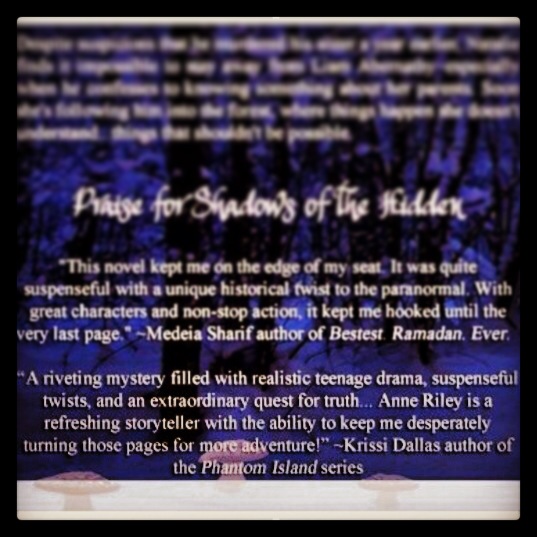 Natalie Watson doesn’t believe her parents are dead, even though they disappeared five years ago. Discovering the truth about their fate is one of the only things that get her out of bed in the morning. But after moving from her home in Georgia to her aunt’s boarding school in Maine, solving the mystery of her parents’ whereabouts is just one of several challenges she must face. When she’s not fending off attacks from the popular kids, she puzzles over the rumors about a strange boy in her math class–one with fiery red hair who rarely speaks.

Despite suspicions that he murdered his sister a year earlier, Natalie finds it impossible to stay away from Liam Abernathy–especially when he confesses to knowing something about her parents. Soon she’s following him into the forest, where things happen she doesn’t understand…things that shouldn’t be possible.

Natalie soon realizes her connection to Liam is deeper than she ever imagined, and not everyone she counts as a friend can be trusted. When she finds herself at the center of a centuries-old quest for immortality, she must work with Liam to stay alive–even if it means facing a truth about herself and her family that will not only shake her perception of herself, but of the entire world around her. 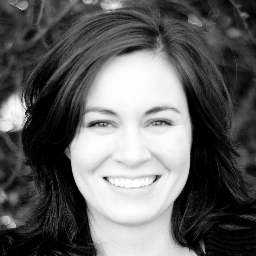 I found Anne’s original edition of this book (The Clearing) through author Heather McCorkle a while back and I was pleasantly surprised with how much I enjoyed this dark tale of murder, time travel, and mystery. I am a HUGE fan of Anne’s writing style– probably because she is snarky and witty in all the ways I am NOT as a writer– but also because she spins stories that immediately pull you into the action. She is currently represented by literary agent Emma Patterson at Wendy Weil Agency and I am super excited to see what the two of them achieve with some of Anne’s newest manuscripts. Count me in as an Anne Fan from the beginning!

I decided I wanted my own readers to have the chance to hang out with Anne Riley, so I asked her some random teen-like questions that are different than the typical ones you’d probably find in her other interviews! (Oh, yes, she got the toilet paper question too… Nobody escapes it in my world.) Here we go…

Hang-Out Time:
Hi, Anne! Thanks for joining me on Krissi’s Konfessions! I am super excited about your release of Shadows of the Hidden and have some questions for you… One thing I noticed first about your writing is that there was a certain teenage voice there that sounded genuine. (Oftentimes, I read YA and think, “Has this writer even TALKED to a teenager in the last ten+ years?”) When I discovered you were a high school Spanish teacher, this suddenly made perfect sense to me. How do you feel being a teacher (and, therefore, being in consistent interaction with real life teens) has made you a stronger YA writer? Does your subject and focus in Spanish affect your storytelling in any ways?

I definitely feel like interacting with teens every day gives me a special ability to write a teen voice. Not only do I see what they wear, how they do their hair, and what kind of expressions they give each other, I’m also aware that the word “shady” isn’t really A Thing anymore, but “totes” totally (totes) is. I don’t think my subject area affects my ability to write a teen voice, but it does cause me to scream silently inside my mind when I read a scene about a teen who is in Spanish class, and then the teacher says something in Spanish, and the translation is WRONG. (Yes, this has actually happened. I’ll refrain from mentioning the book but MY WORD, PEOPLE, get your translations proof-read!)

Haha. *runs off to check my Spanish in Watercrossing* But speaking of languages and cultures… Shadows of the Hidden really dives into a history and people (the Druids) that I am not quite as familiar with… What made you choose to focus on them and how did you go about researching and writing that angle of the story?

I’ve always been fascinated with colonial history, and after spending a lot of time in Britain (and meeting a neo-druid), that fascination sort of spilled over into British history and culture. The great thing about researching druids is that there is very little information out there. They weren’t such a fan of written records, and there are all kinds of myths and legends surrounding them. The lack of information gave me the freedom to create historical records where none existed, which totally made my inner nerd go SQUEE!

What does your writing Cave look like? Meaning, under what conditions and in what setting and time (with what type of snack), do you prefer to write your stories and why?

OH, if only things were consistent enough for me to actually HAVE a writing cave! I usually write either before or after school, at my desk, often while students say my name in the form of a question every five minutes. “Mrs. Riley? Mrs. Riley?” So as you might have guessed, these times can be very productive or very frustrating, just depending on the day. Every once in a while I’ll write on the weekend, but this requires several hours at Panera while my husband watches our two-year-old. He’s willing to do it (and has done it many, many times) but because we’re all either at work or daycare during the week, I prefer to spend the weekends with my family instead of writing. I guess the short answer to this is that I have no writing cave, I’ll eat whatever I can mooch off a student, and I write whenever and wherever I can!

Within this book, people have unique abilities or powers. If you could choose one superpower (of any kind) to have for yourself, what would it be and why?

I’d pick the ability to have perfect hair without having to do anything to it. I know this is probably the lamest possible answer to that question, but I harbor some serious resentment about having to wash, dry, and sometimes–depending on the humidity level–straighten my THICK hair every morning before work!
First world problems, I know, I know.

Your hair always looks fab in pictures, so you must have some kind of power there already. Haha. Okay, so what is the one or two things that you want teens to take away from your book, whether on a thematic or literary level?

1) That it’s okay not to fit in because sometimes the people around you aren’t the kind of people you WANT to fit in with, and 2) Just because everybody thinks some guy in your grade is a loser, does not mean he actually is. Give people a chance. Make up your own mind based on your own experience–don’t listen to other people’s biases.

Those are great reminders for teens! And I love how your characters are not cliche or stereotypical! I also feel honored that I’ve gotten to read in advance some of your other upcoming projects – and they are DELICIOUS! Seriously, some of my favorite writing! Would you like to give others out there a sneaky peeky idea of the novels you’re currently working or waiting on?

Why, certainly! The one I’m working on now is currently entitled CREEPY FACES, which I sincerely hope will not be the ACTUAL title, but it’s been the fake title for so long that I’m completely incapable of thinking about it as anything else. Anyway, it’s a ghost story set in small town Spain, and it’s also got some old Spanish myths thrown in there, and some cute Spanish guys, and murder, and, OH YEAH, lots of creepy faces. I can’t tell you what kind of creepy faces, but trust me, they are creepy.

I’m ready to finish Creepy Faces after you LEFT me HANGING. Cruel, Anne. Simply cruel. I NEED to know what the heck is going on in that creepy town!! And now we come to our favorite question among the middle school crowds… Be honest on this one. Every one of my students answers this question the first day of school: Do you fold, crumple, or wrap your toilet paper? Everybody has a method, Anne. Your readers must know.

Oh, I totally crumple. Mama doesn’t have time to fold or wrap.